Matthew Lasley’s first picture book is Pedro’s Pan: A Gold Rush Story, illustrated by Jacob Souva and published by Alaska Northwest Books in 2019. This whimsical tale manages to tell an entertaining story from the point of view of a gold pan (“call me Pan for short”) while also conveying basic information about prospecting for gold — a topic almost non-existent in children’s picture books.

Above all, Pedro's Pan is fun. Lasley focuses on telling a simple story for ages four to seven about the challenges and joys of a pan and his man in the wilderness. Parents and children may read the story solely for pleasure, while educators may use it as a springboard to spark interest in geology and to explore the social, political, and environmental repercussions surrounding Gold Rush history in Alaska and elsewhere.

Thanks to a well-written text, imaginative illustrations, and thoughtful pacing, the personalities of both Pan and his prospecting partner Pedro come to life as they search for gold. It is Pan, however, that especially shines. In Lasley’s story, Pan is more than a tool; he is a committed partner and companion who helps Pedro in unexpected ways and worries about letting Pedro down. 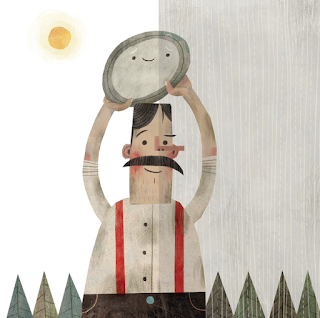 "On sunny days I shade Pedro's eyes.
On rainy days I keep his head dry."

Lasley smoothly incorporates basic information and vocabulary about prospecting into the story, including quartz, black sand, fool’s gold (iron pyrite), and panning. Pan’s voice is straightforward and engaging, with a touch of humor that both kids and adults can appreciate.

Souva’s illustrations extend and complement the text with verve. Unlike the time-worn, stodgy historical images of Gold Rush prospectors we’re familiar with, Pedro verges on the cartoonish — in a contemporary, energetic way. True to prospector form, he still wears suspenders, patched jeans, and what I presume is a button-down union suit. But Souva’s style — a mix of what might be called naive with digital sophistication — gives a feeling of bringing the past into today. The red-flannel-patterned endpapers add a fitting touch.

Pedro’s Pan includes a brief note on Felix Pedro, a real-life Italian emigrant and prospector whose discovery initiated a second gold rush and the founding of Fairbanks, Alaska. Lasley also gives directions on “How to Pan for Gold” and “Gold Facts.” From his bio, we learn that Lasley grew up in an Alaskan gold-mining family and currently lives in Anchorage, where he teaches first grade.
Posted by Ann Dixon at 2:20 PM No comments:

It’s past time to highlight some of the new Alaska and northern books I’ve seen this past year. First up:

At long last we have a biography about Elizabeth Peratrovich!

Fighter in Velvet Gloves: Alaska Civil Rights Hero Elizabeth Peratrovich, by Annie Boochever with Roy Peratrovich Jr., documents the life and work of this exceptional Tlingit woman. Her tireless efforts to end discrimination against Alaska Natives contributed significantly to passage of the first anti-discrimination law in the United States, right here in Alaska.

Thanks to Boochever, who grew up in Juneau (the setting for much of the book) and Roy Peratrovich Jr., the son of Elizabeth and her husband Roy, we now have an accurate historical account of Peratrovich’s life and legacy.

On February 16, 1945 Alaska’s Anti-Discrimination Act became law in what was then the territory of Alaska, a notable feat when we consider that it took nineteen more years for the U.S. Congress to pass the Civil Rights Act. While the work of Elizabeth and Roy Peratrovich, along with many others, was instrumental in creating change, Elizabeth’s eloquent speech before the Territorial Legislature was a decisive factor in striking this legal victory against discrimination. Boochever writes, “This book celebrates all their efforts by telling the story of a woman who exemplified courage and commitment throughout her life.”

Fighter in Velvet Gloves is published by Snowy Owl Books/University of Alaska Press for a teen audience “and their families.” Though the format of the book lacks the graphic sophistication that’s become prevalent among YA nonfiction produced by the Big Five publishers, Fighter is meticulously researched and respectfully written to honor the values of Tlingit traditions. The text includes Tlingit words and names, black-and-white photos, a timeline, bibliography, glossary, and notes by both authors. It sheds light on historical struggles for equality and justice that adults, as well as young people, may not be aware of. Fighter in Velvet Gloves may well inspire readers to make a difference, too.

In 2020 the U.S. Mint will issue a $1 coin with her image.
In 1988 the Alaska Legislature declared February 16 “Elizabeth Peratrovich Day” in honor of her accomplishments.