The Smell of Other People's Houses

We’ve all heard the saying “It takes a village to raise a child.” In Bonnie-Sue Hitchcock’s new young adult novel, The Smell of Other People’s Houses, that village is 1970s Fairbanks, Alaska. The story interweaves the lives of an extensive cast of characters, connected by blood, friendship, and circumstance, as narrated by four teens.

Each of these teens has problems – mostly big ones. Ruth’s father is dead, her mother “gone,” so she and her younger sister Lily live with their strict, emotionally distant grandmother. Dora, from an alcoholic, abusive home, wants to feel part of a family where people like each other and she can sleep safely at night. Alyce, whose parents are divorced, can’t bring herself to disappoint her commercial-fisherman father by asking to skip part of the fishing season in Southeast Alaska to pursue her dream of dancing. And Hank shoulders the responsibility for himself and his two younger brothers as they decide to escape a dismal situation at home since their father died.

Underlying all these characters’ personal difficulties is Hitchcock’s awareness of the effects of poverty, racism, and stereotypes. Some harsh words are spoken. And yet The Smell of Other People’s Houses is anything but depressing. The novel is not so much about the characters’ problems but about how they live through the tough parts, finding hope in small moments, holding on to whatever they can find -- and how people help each other to do that, sometimes in surprising ways. 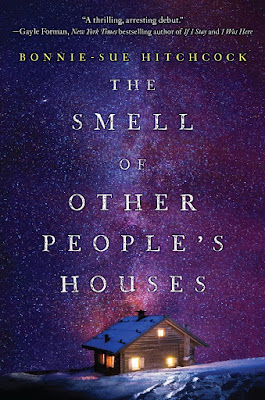 And that is what’s finally uplifting about this book – all those people, whether Alaska Native or non-native, young or old, caring enough about each other to help each other through.

Having grown up in Fairbanks, commercial fished, and worked for public radio, Hitchcock portrays Alaska with all its warts, charms, and eccentricities. Not surprisingly, the power to nurture and heal found in a relationship with the land, through traditional subsistence and small-scale commercial fishing, is a theme throughout the novel. The author’s heavy reliance on synchronicity sometimes stretches credulity — but I found myself ready to overlook this fault in exchange for hopeful outcomes for these young people I’d come to care about.

The voices of the teens are compelling, forthright and distinct. Some may object to the harsh depiction of Dora’s parents, with no explanation of how they reached such a sorry state. Perhaps more could have been done to flesh out those two characters. But overall the author represents a rich variety of Alaskans with insight and affection, without sugarcoating the very real problems teens face. Whether you’re 16 or 60, if you’ve lived in Alaska any length of time – even if you didn’t grow up in 1970s Fairbanks – you’ll recognize familiar people, places, and ways of being in The Smell of Other People’s Houses.

For more information about the book and the author, check out her website.
Posted by Ann Dixon at 7:07 AM No comments: