In six short chapters the book introduces readers to the bond between a family and their Southeast Alaska homeland through the wild foods they gather and preserve. On a rainy winter day, when Mary questions why they live there, her father takes her to the pantry. Jars of food on the shelves — salmon, deer, seaweed, blueberries, and smoked salmon — inspire brief, one-chapter stories about how the food was harvested and preserved the previous summer. Told primarily by Mary’s father, the stories are saved from didacticism by their realistic details, genuine affection between father and daughter, and a conversational style that incorporates Mary’s comments and memories, as well as Dad’s. 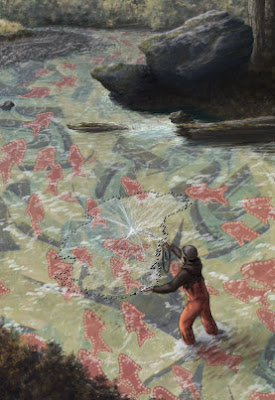 The book is unusual in that it is illustrated by two artists, both from Juneau (as is Lindoff). Nobu Koch’s background in 3-D animation renders graphic-novel style illustrations that form the visual backbone for the story. Clarissa Rizul, a Tlingit artist currently living in Colorado, contributed beautiful formline collages, which Koch integrated into her artwork. Rizul’s images add a layer of depth that enrich the illustrations both culturally and artistically.

Though not explicitly stated in the story, readers presume the family is Alaska Native, based on the art and the introduction, which explains that the story reflects the author's family. Lindoff's husband is Tlingit and Haida and the author was adopted into a Tlingit clan. 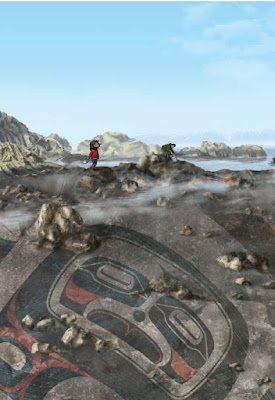 Mary’s Wild Winter Feast is all about relationships — a people to their homeland, a family to their environment and traditions, a father and daughter to each other. It captures the joy of those relationships and the satisfaction of participating in the web of life through harvesting, preserving, sharing and eating wild foods. Best of all, it does that through authentic stories a child can relate to.
Posted by Ann Dixon at 1:33 PM No comments: