One of the things I love about traveling is discovering new books. While browsing the local bookstores in Juneau recently, I came across Spirit of the Siberian Tiger: Folktales of the Russian Far East, translated by Henry N. Michael and edited by Alexander B. Dolitsky, chairman of the Alaska-Siberia Research Center. The eye-catching cover, reproduced from a  painting by Jason Morgan, is only a precursor of the delights to be found inside this beautiful piece of book making.
The four stories inside are translated from a longer Russian edition of literary folktales, which were written by Dmitriy Nagishkin and based upon stories from indigenous groups in the Russian Far East. This English collection focuses on stories in which the Siberian tiger plays a role and pays tribute to their importance, through art, poetry, storytelling and factual information. In a preface and several brief introductory chapters, Dolitsky explains that numbers of panthera tigris altaica are dwindling to the point of critical endangerment. Before launching into the folktales, he discusses the dominant role tigers have played in Native culture and introduces readers to the ethnic groups of the Siberian Far East. A foreword by Wallace Olson, Professor Emeritus of Anthropology at the University of Alaska Southeast, summarizes the significance of folktales in general and these four specifically.﻿
﻿ ﻿
﻿﻿﻿﻿﻿﻿﻿﻿      The stories are intriguing on their own. Titles like “The Seven Fears,” “The Little Girl Elga,” “The Greedy Kanchuga” and “Kile Bamba and Loche-The Strongman” had me hooked even before I began reading. Told in a direct style that flows well, each ends with “Discussion Topics” that would prove useful for teachers. Interior illustrations by Russian artist Gennadiy Pavlishin are sumptuous, whether as chapter-concluding accents or full-page spreads. An index, glossary, bibliography, and transliteration table (Russian letters to English) make this a valuable educational resource, as well as an entertaining storybook with beautiful art.
Published by the Alaska-Siberia Research Center, 2008.
For adults, educators, and older children who have an interest in folk and fairy tales, or Russian and Siberian culture.
Posted by Ann Dixon at 8:17 AM No comments:

I’m a huge fan of parents reading with their children – and that’s an understatement. As far as I’m concerned, it’s essential, right up there with food, clothing, and love. I’m also a fan of book clubs. I cherish the discoveries, conversations and the friendships I’ve made over books in the group I’ve belonged to for many years.


So I read with interest about “Mommy and Me” (or “Daddy and Me”) book clubs. Blogger, mom, and former kindergarten teacher Danielle Scribner writes about the preschool book club she organized and participates in at http://preschoolbookclub.blogspot.com/. It’s a great idea and I love seeing parents and children having so much fun with books and each other. It’s a win-win situation all around: children gain literacy and social skills, while parents enjoy time with their children and other adults.


It reminds me of my years leading pre-school story times as a public librarian. What a joy, introducing young children (and their parents) to stories and books! We had a wonderful time creating crafts and doing activities to extend the stories. Children browsed the bins and shelves of books and were excited to take home their new discoveries each week. Parents swapped child-rearing advice and encouraged each other through childhood stages and illnesses. Over time, friendships and bonds were formed that extended beyond the library.


If you think about it, public libraries all across the country, from big cities to tiny towns, are already providing preschool book clubs – week after week, year after year. Library Story Time is free and usually staffed by enthusiastic professionals or dedicated volunteers. Recently, for example, I received an e-mail from the Anchorage (Alaska) Municipal Library, announcing their upcoming activities. Lapsits, songs, crafts, special events – it’s all happening at the library.


So I say “hooray” for preschool book clubs, whether at home or at the library. Or even better, both.
Posted by Ann Dixon at 7:14 AM 2 comments:

Sled Dogs and Their Humans

The third book I rediscovered this Iditarod season, Wind-Wild Dog by Barbara Joose, isn’t about the Iditarod at all. This tender tale portrays the relationship between a dog musher and a dog that must choose between following its wild nature and staying with the man. Evocative illustrations by Kate Kiesler extend the text to create a beautiful picture book story that explores human-canine relationships, as well as the capacity for wildness we share, in terms that even young children can understand. The soft oil paintings are spare, using body language and focus to express emotional drama. Joose includes a note at the end that provides information about , dog mushing terms, sled dogs, and other related topics. Although this book also runs long at 40 pages, the text is compact, making it a great read-aloud. For ages 4-8 or dog lovers of any age. 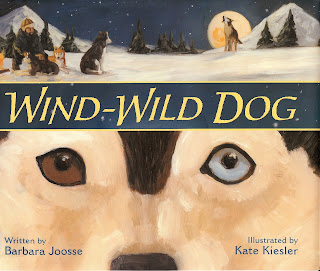 The Iditarod is exciting and challenging, a world-class outdoor competition. No doubt about it. But what sets the Iditarod apart from other dog mushing races is its history. Every year, the race reminds us of the heroic 1925 endeavor that brought life-saving serum by dog team to an isolated Alaska community in the throes of a deadly diphtheria epidemic.
The Great Serum Race: Blazing the Iditarod Trail by Debbie Miller, illustrated by Jon Van Zyle (who has also run the race and creates the official Iditarod posters every year), is a factual and moving account of that historic struggle. The tragedy unfolding as diphtheria breaks out in is juxtaposed with the struggles of the mushers and their dogs to relay the vials of precious serum through raging blizzards and 40-below-zero temperatures. Accurate research combines with narrative storytelling that avoids romanticizing this inherently dramatic true tale. At 40 pages, The Great Serum Race reads well out loud with students between ages seven and ten, or on their own for ten-to-twelve-year-olds. A map shows the route traveled by the serum relay teams; notes at the back list all 20 mushers, the distances they covered, and the contributions of the dogs. 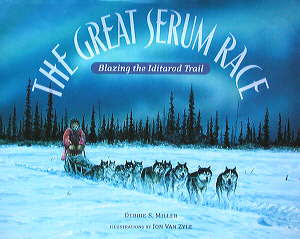 When the Iditarod sled dog race starts* in your hometown, it’s a big, barking deal.

Last Sunday hundreds (maybe thousands) of well-wishers lined the trail, waving to and encouraging the mushers, who were just beginning their 1,000-plus mile journeys to Nome. My friends and I skied to a nearby lake to join the festivities beneath a bright blue sky, with even more light reflecting off the expanse of snow all around us. Dozens of dogs trotted by, belonging to more than 60 teams. Their feet, swathed in colorful booties to protect their foot pads, bobbed up and down rhythmically like staccato notes against the white.

﻿﻿﻿﻿﻿﻿﻿﻿
﻿﻿﻿﻿﻿﻿﻿﻿      I’d been reading books about dog mushing and the Iditarod aloud to students all week and rediscovered several favorites in the process. First is Kiana's Iditarod, a down-home, on-the-trail picture book story about what it’s like to run this wild race. Written by Shelley Gill, an Alaskan who was only the fifth woman to complete the Iditarod, and illustrated by Shannon Cartwright, an artist who lives off-road in the Talkeetna Mountains, this oldie-goldie manages to convey information as well as excitement about the hazards and the competition along the trail. Although written in verse that is serviceable, but not always perfect, that flaw is forgivable in exchange for its authenticity, inviting illustrations, and dog’s-eye-view of the race. The colorful art is visually interesting and nearly capable of telling a story on its own. At 64 pages, Kiana's Iditarod is longer than the usual picture book for reading out loud, but the story moves quickly as lead dog Kiana races with her team. A map of the route, general note about the race, and glossary of dog mushing terms provide clear-cut, helpful information. For ages 4-8. 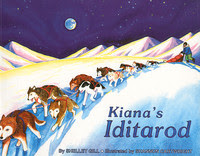 *The official start is in Anchorage. That is a ceremonial start. The "restart" -- when mushers and teams actually begin the journey by dog sled to Nome -- takes place in Willow.
Posted by Ann Dixon at 3:53 PM No comments:

The University of Alaska Anchorage and Anchorage Daily News are again sponsoring a creative writing contest, open to Alaska residents. The categories are nonfiction, fiction, and poems (up to three). Age groups are K-3, 4-6, 7-12 and adult. In addition to online and print publication, the winners will receive cash awards ranging from $25 to a $200 grand prize.

This excellent program is now in its 29th year. It's a great opportunity for would-be writers to take the plunge and for the public to discover new Alaskan writers. So Alaskans, don't be shy! Submit your best work by April 15, 2011 here.
Posted by Ann Dixon at 7:14 AM No comments: