I admit, I am totally biased when it comes to books by Astrid Lindgren. I have yet to read one I didn’t like and many of them — The Tomten and the Fox, Emil in the Soup Tureen, The Children of Noisy Village, and Ronia, the Robber’s Daughter, for four — I adore. So I was excited to read “A New Trip to Lindgren Land” by April Bernard in the New York Times Review of Books a few months ago. Not only did I discover a Lindgren book I’d never read, I learned about the New York Review Children’s Collection, which has been re-issuing vintage classics (some familiar, some I've never heard of, and a few decidedly quirky) in attractive, well-crafted new editions.

I couldn’t wait for Christmas so I ordered both Lindren’s Seacrow Island and Mio, My Son, which I was familiar with. And I’m here to report, biased but nonetheless reliably, that Seacrow Island is a delightful read. (If you don’t believe me, read Ms. Bernard. She agrees.) 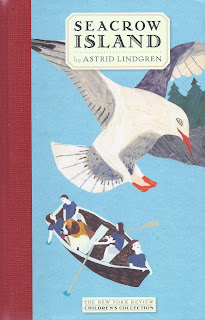 On the surface, Seacrow Island is a simple story about the adventures of a family at their summer cabin on one of the archipelago islands that dot Sweden’s eastern coast. It belongs to the minor genre of “happy family” literature, as Ms. Bernard calls it, which has fallen somewhat out of vogue in recent decades in favor of more gritty realism.

Lindgren’s writing elevates the story beyond any tendency toward triteness; her “happy family” is never boring. Her ability to portray the emotional lives of a variety of characters gives the story great heart. Even minor characters are alive with distinct personalities, worries, fears, and dreams. We begin with the scatterbrained but loving father, Melker, his sons, Johan, Niklas, and Pelle, and nineteen-year-old Malin, his beautiful daughter, who has run the household since the death of the children’s mother at Pelle’s birth. But the characters don’t stop there. As soon as the Melkers arrive on Seacrow Island, they become part of this small, vigorous community, with adventures involving children being lost at sea in the fog, a variety of pets (including an orphaned seal), a string of suitors interested in Malin (and generally abhorred and tormented by her younger brothers), several small housing disasters inadvertently initiated by Melker, disagreements with a disagreeable neighbor, and the machinations of Tjorven, a six-year-old force of nature with a Saint Bernard. Throughout it all, the intricacies of relationships between friends, family, and the natural world are at play.

One of the most interesting and effective aspects of the book is the skill with which Lindgren moves between viewpoints of the main characters. The shifts are so smooth as to be barely perceptible. One minute Malin is daydreaming about life and love and summer; the next moment, Melker is planning a party and the Saint Bernard is eating cream cake. So it goes on Seacrow Island. The seamlessness between characters creates the illusion of being right there among them, perhaps even as a member of the family. The dialogue is often humorous and surprising. As one unexpected event leads to another, Lindgren’s affection for her characters is constant. When the ending arrived, neat and tidy, I didn’t want it to be over. The company was just so enjoyable.

Like contemporary family stories, there are plenty of problems to be dealt with by our characters. But somehow we know that in the world of Seacrow Island, family, community, and good solid sense will prevail.

For more information about Astrid Lindgren and her work, this is a great place to start. 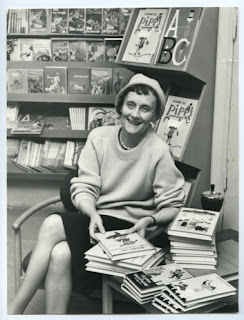 Shortly after I posted my last blog piece, congratulating the creators of the books on the 2015 New York Times Best Illustrated Children’s Books list, I discovered the controversy surrounding A Fine Dessert, written by Emily Jenkins and illustrated by Sophie Blackall. It’s taken me a week to digest all the viewpoints and messages on social media, which are on-going. While the book is not connected to the North (as I consider it for this blog — at least north of the 45th parallel), I feel compelled to comment because I mentioned the book out of my regard for its author and described it as “lovely” — which epitomizes the problem — and because the problem of diversity in literature for children exists everywhere, including the North.

The illustrations are, indeed, lovely in style and artistry. The text is lovely in choice of words, with thought-provoking notes at the end by both author and illustrator. The problem is, one section of the book includes a vignette set on a slave plantation in South Carolina. And slavery is in no way lovely.

I read the book once last summer, when it first arrived at the library where I work, and remember being surprised by the plantation story (one of four brief tales, set over four centuries). It was disturbing, placed as it was amid three other stories set within happy circumstances. But I didn’t think too much about it, other than that it warranted closer examination (clearly an example of “reading while white,” as well as procrastination). My two lasting impressions of the book were that it was artistically “lovely” and also that it would be a book best suited as a resource for discussion, rather than a casual, recreational read.

I reread the book this past week, several times. My first reaction to the criticisms was defensive. As a writer — yes, a white writer — I know how hard it is to conceive, write and publish children’s books. I’ve met Emily Jenkins and found her to be a thoughtful person, fully engaged not just with writing but with evaluating and appreciating literature for children. I can empathize with Jenkins and Blackall. They took a risk by including that section and they appended notes that make it clear the book is intended to be used as a springboard for further discussion.

But the more I thought about it, as a writer, former school librarian, parent, and aunt of multi-racial nieces and a nephew, I agreed with much of the criticism. I can’t fully comprehend the experience of growing up and living as part of a racial minority in the United States, no matter how much I read or discuss or think, because that isn’t my experience. But I can understand why that section of the book upsets or angers some readers.

Opinions on the book are varied and instructive. Some African-American commenters do not object to the book (though the vast majority does). Several commenters have posited that the book isn’t about slavery, it’s about a dessert and the joy of sharing something delicious throughout time -- which it is. But that one section on the plantation is so different in circumstances from the other three that it doesn’t fit the overall “lovely” tone of the rest of the book. So different that two pages of notes — a lot for a picture book — are needed to clarify and explain.

The best children's books are truly works of art. Art is messy, controversial, sometimes risky, and may not be received as the creators intended. Discussion of issues surrounding diversity is often difficult, even painful. If you want to learn about this controversy, I urge you to read the book as well as the opinions in social media. A good place to start is here. I appreciate efforts by bloggers, such as Debbie Reese at American Indians in Children’s Literature and those at Reading While White, to keep those issues in the forefront. I also appreciate the hard work of the many fine writers and artists who strive to get it right — even if they don’t always succeed.
Posted by Ann Dixon at 7:35 AM No comments: